Dr. Ravi Reddy, Dr. James Brown and I (Chris Riggs) represented WEVA at a two-day interactive workshop for equine veterinarians at Shirwal, Maharashtra on 24th and 25th October 2016. The meeting, which was held in conjunction with the Indian Association of Equine Practitioners (IAEP), was well attended with 44 equine veterinarians from all over India and 12 senior undergraduates from KNP College of Veterinary Science present.

Shirwal is approximately 50 km South of Pune, which itself is 120 Km South East of Mumbai. A population of just over 1000 Thoroughbred racehorses decamps from Mumbai to Pune racecourse during the rainy season. The season in Pune finishes in late October and the meeting was planned to coincide with a lull in work immediately preceding the return of the horses to Mumbai.

Both mornings were filled with lectures from James and I, on subjects that included examination of the equine abdomen, surgical conditions of the intestinal tract, sinus anatomy and surgery, tooth extraction, radiography and fetlock disease in the racehorse. In addition there were interactive sessions involving case reviews and useful discussions on the value of continuing profesisonal development and how to develop courses that would provide most effective support to equine veterinarians in India. Delegates were divided into two groups in the afternoons and rotated between wet labs each day. On Monday topics included anatomy and surgical exploration of the equine abdomen and clinical examination of the respiratory tract. On Tuesday we covered surgery of the para-nasal sinuses, management of mandibular fractures and radiography of the equine lower limb.

The lectures and labs were well received and delegates were enthusiastic to ask questions and share personal experiences. Nine of the delegates regularly perform surgery in treatment of severe colic and one participant, who works for the Indian army, shared that colic is particularly common in mules and packhorses, especially when they are first relocated to the mountainous border areas of Kashmir. A large proportion of the delegates are involved in the management of Thoroughbred racehorses and there were good contingents from Mumbai, Pune and Bangalore Turf Clubs.

James and I were both impressed with the knowledge, dedication and wide experience of many of the delegates. We sensed a genuine care for animals, as exemplified by one delegate who showed us photographs of a monitor lizard in which both femurs had been fractured (to stop it running away), which he had successfully pinned. We were interested to learn about a wide range of laws to protect animal welfare in India.

It was clear that there is a large appetite for equine-related CPD in India and several topics have been proposed for further attention, which WEVA may wish to consider in the future.

The meeting, which was hosted by Dr. Ulemale, Head of the Department of Veterinary Surgery and Radiology, Maharashtra Animal and Fishery Sciences University was opened and closed in traditional Indian style. This was a novel experience for both James and I as it included us all lighting wicks in a “lamp of knowledge” at the start of proceedings and receiving special attire at the end (as illustrated). The Dean of the College, Dr. Ranade Sir and the president of the IAEP, Dr. Kunchur attended the opening and closing ceremonies.

We were all treated to a spectacular display of local dance at a course dinner on the Monday night. The dancers, two highly educated local ladies who frequently perform on the world stage, moved with such poise and grace that we were all entranced. They explained the history and character of each dance in advance, which allowed us to appreciate the importance of subtle movements, such as a sideways glance with the eyes or slide of the torso. The dancing that followed later in the evening, involving most of the males in attendance, was not quite of the same calibre!

In summary, the meeting was a positive and productive opportunity to share knowledge and for us all to contribute to better care of the horse. Many of the delegates expressed their appreciation, especially to WEVA for making the meeting a possibility. 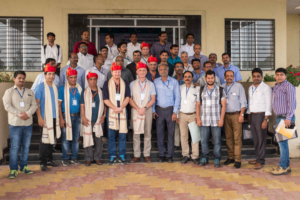 Back to main reports page.