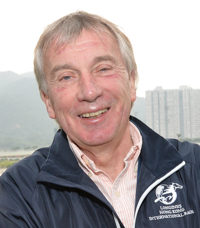 Desmond Patrick Leadon FRCVS, « Des » has worked in equine practice in Ireland, England, Australia and Spain. He has provided consultation services in Russia, China, Italy, France and many other countries and has been involved in equine clinical medicine, equine research, teaching and advisory services for over 35 years.

Des graduated as a veterinarian from Trinity College Dublin in 1975. He returned there and was awarded his Master of Science degree by thesis. He subsequently joined the world famous equine specialist practice of Rossdale and Partners in Newmarket and was awarded the degree of Fellowship of the Royal College of Veterinary Surgeons, London, by thesis, in 1982.

He returned to Ireland to equine practice in Co. Meath before joining the then newly established Irish Equine Centre in 1984. Des served as Head of Clinical Pathology at the Centre from 1984 to 2014 and his current position there is that of Consultant Clinician. He has served as President of both the British Equine Veterinary Association (1993-1994) and the World Equine Veterinary Association (2001-2006). He continues to serve the Past Presidents Advisory Committee of the World Equine Veterinary Association (2006 to date). He is a Founding Diplomate and former Vice-President of the European College of Equine Internal Medicine (2002 to 2008). He served an initial term as the International Director of the American Association of Equine Practitioners (2009 to 2011) and was then invited to serve a second term (2011 to 2012).

He has recieved research funding grants from organisations that include the International League for the Protection of Horses, The International Equestrian Federation, The Hong Kong Jockey Club and Ireland’s National Development Plan, Department of Agriculture and the Irish Thoroughbred Breeders Association.

Des is a pre-race inspector for the International Racing Bureau (for the Hong Kong International Races) and acts as an Advisor and as an Arbiter in insurance case disputes for Lloyds Underwriters.

He was appointed to the Equine Liaison Group of the Department of Agriculture and also serves as Ireland’s representative on the Code of Practice Committee and on the AHT Industry Liaison Committee.

Des and his wife, Dr Mariann Klay own, and breed thoroughbred racehorses for themselves and their clients, on their studfarm near Punchestown in County Kildare (www.swordlestownlittle.com), where they have bred Black-type winners on the flat and over jumps including « Lilbourne Lad » one of the best two year olds in the UK and Ireland in 2011 and now a stallion standing at Rathbarry Stud. They were presented with the Small Breeder of the Year Award by the ITBA in January 2012 and Des was presented with the « Outstanding Contribution to the Thoroughbred Industry Award » by the Irish Thoroughbred Breeders Association in January 2014.